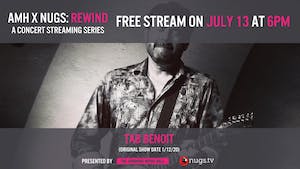 iCal
Google
Head over to our Facebook page at 6 PM to catch the Nugs stream of Tab Benoit live from 1/12/20!

Tune in to the broadcasts every Monday and Friday at 6pm! Because this series is free, please consider making a contribution to any of the following organizations:

Ardmore Music Hall Staff GoFundMe - 100% of proceeds go to benefiting the employees at The Ardmore Music Hall. If you would rather contribute to the venue directly instead of through GoFundMe, you can do so through our AMH Venmo (@Ardmore-MusicHall).

Voice of the Wetlands - Voice of the Wetlands was established in 2004 as a volunteer-based non-profit, focused on driving awareness about the loss of the wetlands in southern Louisiana. VOW was started by musician Tab Benoit who was born and raised in Houma, LA – one of the communities born of the wetlands. A coalition of local artists and business leaders recognized the urgency to save their homes and the culture of southern Louisiana.

Since its inception, VOW has hosted a number of efforts including an annual free, 3-day festival since 2004, and a bold initiative of taking over 50 New Orleans musicians to perform at the 2008 Democratic and Republican National Conventions. In addition, VOW has been represented to the federal government by Tab Benoit during sessions on Capitol Hill in 2008. The sessions focused on the urgency of restoring and the need to preserve the Louisiana wetlands.

Voice of the Wetlands takes an active role in driving awareness to restore the wetlands from a local to a national level. The organization prides itself in maintaining a mission that addresses all aspects, causes and solutions.

Voice of the Wetlands is the only cultural preservation and wetlands restoration organization comprised of members who were born and raised and continue to live in the communities created from Louisiana’s wetlands.