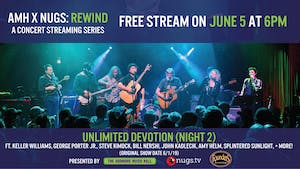 iCal
Google
Head over to our Facebook page at 6 PM to catch the Nugs stream of Unlimited Devotion live at The Ardmore Music Hall from 6/1/2019!

Tune in to the broadcasts every Monday and Friday at 6pm! Because this series is free, please consider making a contribution to any of the following organizations:

Ardmore Music Hall Staff GoFundMe - 100% of proceeds go to benefiting the employees at The Ardmore Music Hall. If you would rather contribute to the venue directly instead of through GoFundMe, you can do so through our AMH Venmo (@Ardmore-MusicHall).

Workers United GoFundMe - 100% of proceeds go to Workers United, a not for profit union that has created a separate fund for displaced workers who are food insecure. They are partnering with Philabundance and Nutritional Development Services (NDS). The food bank will be open to the public every Saturday from 10am - noon, at 22 S 22nd St.